A leaked letter indicates Boris Johnson and the Foreign Office may have covered up the chief minister’s involvement in airlifting more than 150 dogs and cats from Afghanistan, a senior MP has said.

On Tuesday it emerged that the charity worker Pen Farthing received a letter from Johnson’s parliamentary secretary saying Farthing, his staff and the animals could be rescued from Kabul amid the Taliban takeover in August, when thousands of Afghans with UK connections were also trying to flee. 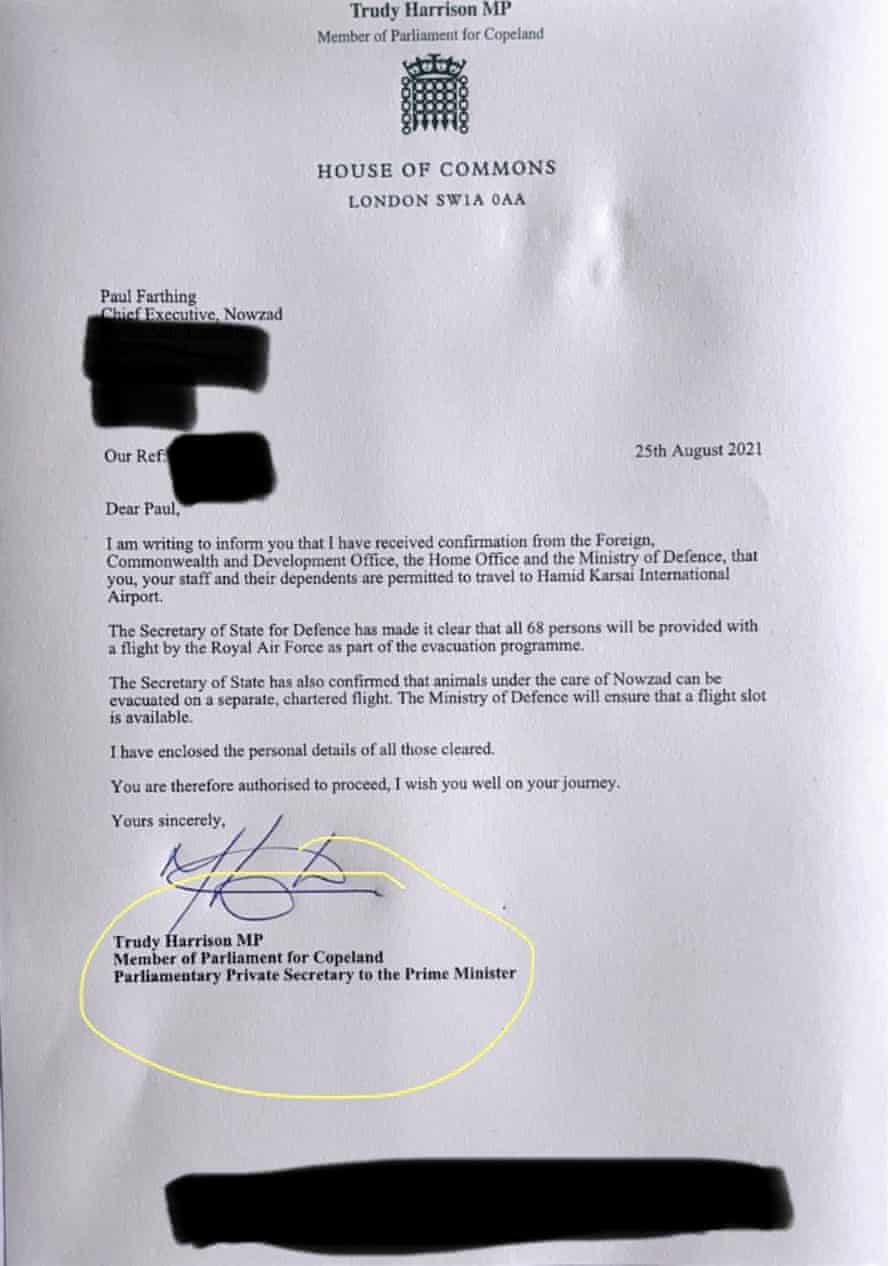 The letter was signed Trudy Harrison, MP for Copeland and parliamentary private secretary to the chief minister, and says: “I have received confirmation … that you, your staff and their dependents are permitted to travel.” All 68 people were to be provided with a place on a RAF plane, it continued, while the animals could be “evacuated on a separate, chartered flight”.

Earlier, Johnson’s spokesperson denied any intervention by the chief minister after claims made by a Foreign Office diplomat-turned-whistleblower about the disorganized evacuation, including the animal airlift which triggered claims pets were prioritised over people.

“At no point did the chief minister intervene,” Johnson’s spokesperson said. “We have always prioritised people over animals, as we said both during and afterward.” Responding to the letter, No 10 insisted: “This was an operational decision … This letter was nothing to do with Ms Harrison’s role as the PM’s PPS, she was acting in her capacity as a constituency MP.”

Earlier in the day, Johnson had insisted he did not personally intervene to force Ben Wallace, the defence secretary, to let the rescue go ahead, describing the claims as “complete nonsense”. His spokesperson also denied any involvement by Carrie Johnson, who Farthing’s allies had been in contact with.

Harrison’s letter was intended to be shown to British soldiers guarding access to RAF planes in Kabul as thousands of Afghans were desperate to be evacuated to the UK.

On Tuesday the foreign affairs select committee concluded a hearing on Afghanistan after the whistleblower testimony of former civil servant Raphael Marshall, who also accused Johnson of issuing “an instruction” to ensure that 173 dogs and cats looked after by Nowzad were rescued.

Chris Bryant, a Labour MP, suggested there had been a concerted attempt to “cover up” Johnson’s personal intervention. He read out Farthing’s letter to the senior Foreign Office civil servants who had spent the past hour defending the Afghanistan withdrawal and insisted no animals were prioritised over humans.

“This doesn’t equate with what you’ve told us, does it?” Bryant said. Philip Barton, the FCDO’s most senior civil servant, insisted he had not meant to mislead MPs, telling them: “We’ve set out in good faith our understanding of the position. I’m not aware of the letter you’re talking about, I’m very happy to look at it but we have not set out this afternoon to mislead you.”

But Bryant suggested the committee had been told a different version of events.

He said: “The PM’s fingers are all over this, aren’t they? And you’re just trying – I’m hesitant to use the words ‘cover up’ – but that’s what it feels like.”

The exchanges follow a day of claim and counterclaim over the issue. Downing Street has consistently denied the chief minister or his wife had become personally involved, although allies of Farthing, a former royal marine running the Nowzad animal charity, said they believed Wallace had been overruled by Johnson.

Dominic Dyer, an animal rights campaigner working with Pen Farthing and his animals from Afghanistan, said he was confident “pressure had been brought to bear” by Johnson to allow the airlift to go ahead despite MoD objections.

The intensive lobbying of No 10 had also included texting the chief minister’s wife with updates “every few days”, Dyer said. Dyer describes himself as a friend of Carrie Johnson, who has a longstanding interest in animal rights campaigns.

Wallace had been blocking the airlift of Farthing, staff at the charity and the animals, arguing their rescue could not be a priority when the military were scrambling to airlift thousands of others at risk. That changed suddenly when Wallace announced a surprise U-turn in a tweet at 1.33am on 25 August.

Dyer said that could only have come about after an intervention from No 10. “I’ve been around politics a long time. You don’t get a situation where the secretary of state changes his view and puts out a tweet at 1.33am unless pressure has been brought to bear. I believe the PM got involved,” the campaigner said.

The story behind the controversial rescue of Farthing has come back in focus in the light of Marshall’s testimony to the foreign affairs select committee, released overnight.

In it Marshall wrote that the US and UK militaries were taking “extreme measures” to preserve limited evacuation capacity at Kabul airport on 25 August.

“In this context, we received an instruction from the chief minister to use important capacity to transport Nowzad’s animals,” Marshall wrote, a decision that he said meant “British soldiers were put at risk” to help the evacuation go ahead. “The protection of domestic animals was not a UK war aim in Afghanistan,” Marshall additional in his testimony.